Russia is famous for their citizens parking in all the wrong places. So online Russian newspaper “The Village” took over this issue and hired LOOK AT MEDIA agency from Moscow to create an amazing mobile app, which allows you to take a picture of the car parked in an inappropriate place. The app then recognises the car make, plate number and colour of the car, which is passed on to the banner system. 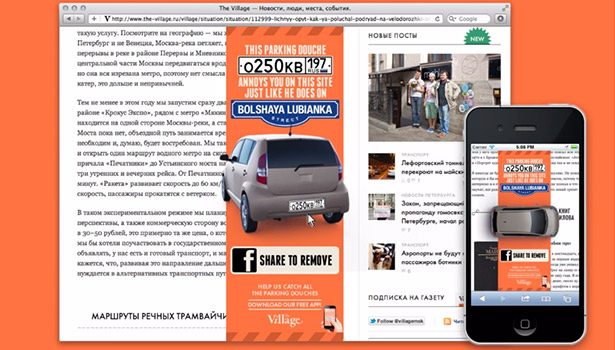 So here is the fun part. When someone is browsing online, the real photographed car appears on the screen and blocks the view of the website. It is also shown, which street the car is parked in on a real-time basis. A particular car is only exposed to people, who search online in the neighbourhood based on their IP addresses. So if you park the car and someone takes your picture, you will only be seen by all your friends and colleagues around. And here is a viral part of the whole campaign – the banner only disappears from your screen after you share that inappropriately parked car on your Facebook wall.

The app has already won Grand Prix in the Golden Drum awards, Golden Cannes Mobile Lion and an award for the best interactive banner in the Red Apple Awards in Russia. It also got some really good feedback from the big players such as Mashable, Bloomberg Business Week, Top Gear and lenta.ru.

Have a look at the campaign case study below:

A great example of how user generated content can be integrated into paid online media placements in real time. Plus we love the “Share to Remove” call to action on the banners. Very good idea!