Remember the old and famous Coca-Cola with a bunch of people singing “I’d like to teach the world to sing…”. Grow Interactive and Johannes Leonardo joined their forces and searched for an inspiration in Coca Cola’s own good old stuff and did come up with something amazing…again! Here is a mobile ad, which acts more like a mobile application and allows users to buy someone else a can of Coke. Why would you do that? Because it is like sending a message in a bottle, only a message will be on a can. Someone in the world will actually receive it and you can choose, which part of the world it will happen in.

Forty years ago Bill Backer and myself had a wish, and that was to buy the world a Coke. I am honored to have lived long enough to see that wish become a reality. 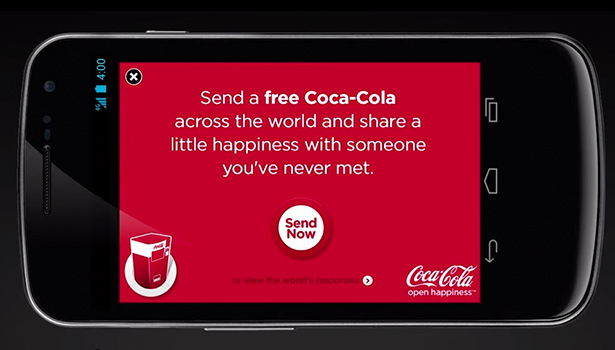 Interested already? Well this is not the end. The extension of this campaign takes participants even further. Coca-Cola tool a bunch of wending machines and stuck it all around the world for people to take free cans of Coke. Well, not free ’cause someone bought them for you! Once taken, the receiver can send a message to back to the person, who bought the can. And that is how Coca Cola connects people around the world.

Check out the campaign video here:

More about Project Re:Brief by Google:

The idea was clever enough to get Coca Cola a 2012 Mobile Lions Grand Prix in Cannes Lions. Voilà!